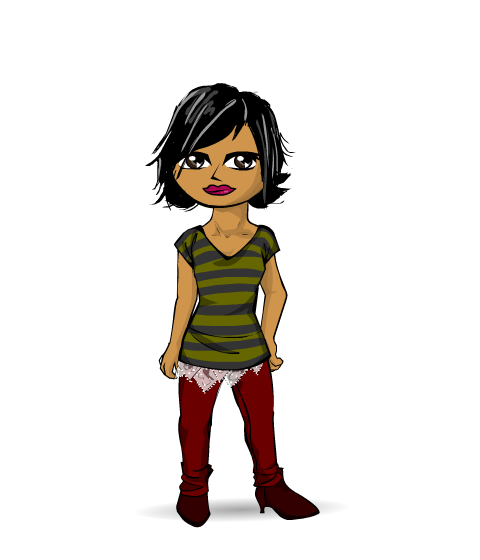 There once was a girl named Sam???

Early one morning, Sam had decided to wake up early for school. She wanted to look extra special, for this certain guy she liked. Sam, the night before, had planned out her outfit before hand. She was going to wear, (since it was St.Patricks day), a green tank top, green blazer, 4 leaf clover medallion, skinny jeans, converse, and have her straightened.
When Sam woke up that morning, to hop in the shower, she was feeling a little dizzy, figuring it to be the nerves; she just got over it and got into the shower. As Sam was in the shower, she began to feel more and more faint, by the minute. She got out, a little freaked, and took and Advil.
As planned, Sam got dressed, straightened her hair, did her make-up (green eye shadow, mascara, and eyeliner), put on her shoes, and walked out the door to wait for the bus. As Sam was waiting for the bus, she noticed a strange shadow in the distance, but just made it as a stray cat.
Like normal, she got on the bus, and sat in her normal seat. She sat in the back, with this one guy, of whom she liked a lot.
???Hey??? Sam said, trying to make conversation
???Hey, got enough green on?
???I guess, with my luck, if I didn???t wear any green, they would probably pinch my face, which, I imagine hurts,???
???Haha, I guess it does,???
Sam went back to listening to her Ipod, with one ear bud incase he wanted to say something. Nope, all morning, she just sat there, when she would look over, she would notice him staring. He almost wouldn???t realize she caught him, but, would, and would immediately look away.
As Sam walked into school, still boggled by why he was looking at her like that, she noticed stares, up and down, some even with their mouths open. It WAS still rude to stare right? When Sam realized so many people were staring, she looked up, boggled, and still a little dizzy, she smelled her sleeve, no, what was it? Then, she remembered, she had looked completely different.
Sam walked into the cafeteriam (cafeteria and auditorium combined) and sat at the corner table where she would normally sit. All of the 8th graders LOVED to think that it was ???their??? table. Sam loved to Newths float my boat people off, especially if they had the nerve to talk about her behind her back.
Paul walked around the corner, to see Sam, and all he could manage to say was, ???Who???s the new girl????
???She???s not new! That???s Sara Palin!??? joked Lewey
???Really?!???
???Yeah!???
Sam sat there, laughed, blushed, and then looked away. Sam had instantly known what ???Sara Palin??? was referring to. She had glasses that sort of made her look like Sara Palin! All day, Sam received stares up and down, and, at recess, when she played softball, people looked at her like she had three heads.


As time wore on, Sam continued to dress girly, but, people who truly knew her, knew, she was no girly girl, and could take on any of the guys at school. Most were intimidated, others, though, the daring ones, took it as a challenge. Every time, the same outcome, they run away in pain.


One day, she decided to change, she decided, she was going to tell Brian, how she felt. Everyday, just at the thought of telling him, she would have shivers, just going, 90 mils an hours, up and down her spine. Her stomach doing back flips, her mind going blurry, until, even almost to the point of passing out. But, when she was near him, all of those things, times 3, and her mouth, can???t possibly manage to work, for the first time in her life. Everyone had always complained about her talking too much, but, around him, no words would ever manage to sneak out.
???Can???t wait to graduate,??? he said
???Yeah, my mornings will be boring without you though???
???Sorry! You going to the street dance tonight????
???Yup! I am going with Maliyan, and Sara Bickford???
???Cool! You know anyone else going????
???No one you know???
???You would be surprised, who????
???Brittany, Sara, Heidi, Becca, Haley, Karin???
???Ok you???re right,???

Later that night
Sam got dressed, white shorts, blue shirt, and makeup with flip-flops. She walked to the street dance, where, she met her friends. In the back, was ???the crew??? from their school. Sam and Maliyan weren???t accepted into the crew, because they didn???t do drugs. Many rumors had been circulating, that most of them smoked pot, but Sam knew she knew that Brian didn???t. And it was true, he didn???t. He didn???t really fit in with them. He more hung out with the crew from Old town, none of whom, did drugs. He was a skater, dirt biker, basketball player, soccer player, pretty much everything, but, a drug addict.
Sam, was really hyper, a result from downing 3 giant pixie sticks, and 5 mountain dews. She went to scream, ???I love pixie sticks??? but, instead, she screamed, ???I love Brian!!??? He was only about 5 feet away, and, not knowing it, she kept screaming, the same thing, over, and over again. He heard her, he definitely heard her. Her friends, stopped her, and took her sugar away. Well, little did her friends know, Her and Brian ended up hanging out after the dance was over.


After that weekend, she was exhausted, and embarrassed. She got on the bus, expecting an awkward silence, but, instead, they carried on like normal. As if nothing had ever happened.
Sam, really needed to cry, later that afternoon, all the names, the words, they were all getting to her finally, so, she asked to go to the bathroom, and, left, making no scene. When she walked out, she found, Paul, Brian, Lewey, Steven, all, sitting on the stairs.
???Hey, hey, hey, hey, fine then!??? Brian said. Sam ignored it, and, knew, if she said, anything, anything at all, her voice would break, and give her away, she would never be able to get away with it. She walked into the bathroom for a few minutes, cried, cleaned herself up, then walked back out, into the hall.
???Hey!??? Brian said again, still looking for a reaction.
???Hi??? was all Sam could say. Then she noticed, Paul, and Steven, had left, no clue where, but they where gone. So, only Brian and Lewey were left. Sam walked over to her locker, and began to unlock it.
???BRIAN LOVES YOU! HE WANTS TO GO OUT WITH YOU!??? After that, Lewey said something, COMPLETELY unintelligible, he just kept screaming the same thing over and over.
The whole time, Brian, was standing there, screaming, ???SHUT UP! SHUT UP! DON???T LISTEN TO HIM!??? he was laughing, for some reason, no one knows.
For one instant, Sam felt a faint glimpse of hope. But, crushed, as fast as it came on. She blushed, locked back up her locker, and returned to class. After that, she kept making all of the most ridiculous excuses to go out into the hall, to see what else would slip out.
???Why do you keep coming out here???? Brian asked
???Need a new pen, god! Spastic much???? was all Sam could think of.
???Jeez! Nevermind!??? Brian sounded amused, but, yet, offended.
Sam walked into her room, and, as soon as she sat down, she told her best friend, Maliyan, who then, told Kirsten, who told Mahalia, who hung out with Lewey. Mahalia asked Lewey if he was serious, he was. As soon as Sam heard the news, she instantly turned as bright red as a tomato.


Weeks past, and, it was time for Brian and Lewey to graduate. Sam became more and more depressed, by the day. She would often cry herself to sleep. Just to awake with blood shot eyes. That was when she was determined to tell Brian, to tell him the truth.

I love to write! I wrote this in one night. Please write my story 1-10! Thanks! If you have any suggestions, I might think about it! NO COPYING! I WILL tell staff, and you WILL be banned!

2] You haven't played solitaire with real cards for years.

3] The reason for not staying in touch with your friends is they don't have a screen-name or MySpace.

4] You'd rather look all over the house for the remote instead of just pushing the buttons on the TV.

6] Your boss doesn't even have the ability to do your job.

7] As you read this list you keep nodding and smiling.

8] As you read this list you think about sending it to all your friends.

9] And you were too busy to notice number 5.

11] Now you are laughing at yourself, stupidly.

12] Post this in your blog if you fell for it.. you know you did XD