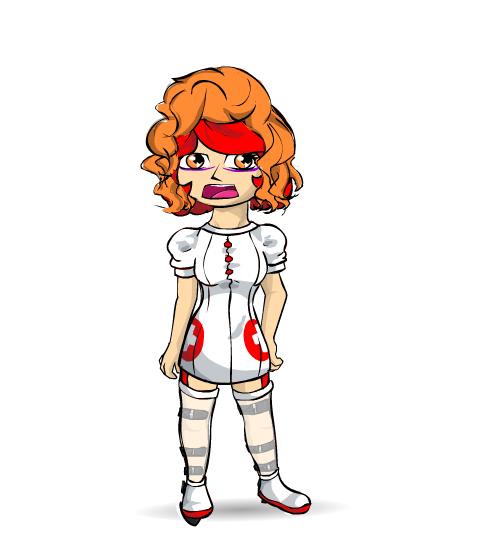 So here's how it works:

You will be able to apply twice, once here on this blog and once on the board I will be making for this give-away (I will post the link here later!).

So, you can apply twice and get two items in total.

You can enter by simply posting enter.

All the items will be randomly chosen from my attic and from shops.
There could be cheap items among them and also more expensive ones.
Most of all, it's free to you all

So start entering, so I can start sending.

Btw, after recieving your items please post what you got

Just post enter here and I will send you a random item (not a junk item!)

Once you received the item, post here what you got.

You can participate both here and on the forum, so you can get 2 items

Since my browser (firefox) has a word limit, I have made my app for Fragrances into a blog!

I'm a creative person and I'm mad about colour.
Because of that my house is rainbow coloured and so are all my things.
Even my marapets family is a colourful bunch

I also love pets.
Cats, dogs, bunny's, butterfly's, dolphins and orca's in particular.
My boyfriend and I are the proud owners of a cat called Otschi and a dog calles Jacky, and they are like children to us.
They are both girls and I love them to bits.
I have named 2 of my marapets pets after my real life pets.

I have been playing Marapets for over 7 years and I still enjoy it.

I like to participate in almost anything mara, restocking, playing games, auctions,my own club (Lush Life), collecting things, getting LE's, training and statting my pets in every way possible, collecting treasure maps and instructions, they are all part of my mara hobbys, and I spend a lot of time on mara most days.

When it comes to pets, I look at names first and then also at the species and their costumes.

I really like the name "Fragrances", mostly because of something you won't expect.
You see, I am a perfume/fragrance addict

!
I own more than 200 perfumes and I wear perfume every day, some days I even switch between perfumes every couple of hours.
I know this sounds crazy, but I just like things that smell nice.

I really like her costume, since Cotton Candy is the prettiest Chibs costume to me.
Because of that it's very unlikely that I would change her costume, but I can't promise that.
I was actually even looking to get a Cotton Candy Chibs, so if I received Fragrances I would be able to complete that goal.
I am collecting all the Cotton Candy pets, you see.

Fragrance isn't my dream pet, but she IS lovely and her name is awesome, so she would definitely be a great addition to the pets I own.

I don't know if I deserve Fragrances or not, I mean, how can you deserve something on marapets?
I'd like to think I am a nice and good person, and I like to help people and give things the other users, but that does not mean I deserve your pet.
You know, I never helped you in any way, I think, so I cannot say I deserve it, because what I have done for others doesn't matter right now.
Also, we don't know each other and I'm just another applicant for your pet, just like the rest of them.
I can't say I deserve her, because that would be selfish and unfair, to claim that I would, even though I don't deserve her anymore than anyone else, and I can't do that, I have to be honest with you or it won't feel right to me.
Even though I don't deserve her, I would still adore accepting her in my home.

I won't lie and say that I love Fragrances, because I don't, at least not yet.
How can I love something that isn't mine and that I did not even know existed, until now.
I can't lie to you about love, simply to win you pet, some pixels on the internet (may it be some pretty pixels

), that would just be rediculous, to lie about that.
Love can't be forced upon you, it has to grown in it's own time and because of free will.
I love all my pets, I have grown to love them and I have become attached to them, and I can't even trade, sell or give them away because of that.
(I have 4 pets though, that I got through pet auctions and that will be auctioned or raffled for my club, these pets are: Adjoining, Agalia, Elulum an GypsyWoman).
I can assure you, that even though I don't love Fragances yet, if I would receive Fragrances I would come to love her as one of my own!

I have made a poem too

I took my pets on a trip to Candyland,
They were all excited because of this wonderful event.
We walked on the road past the Factory Outlet,
And when I couldn't buy the Colour Concoction Bodelia got upset.
I asked:"Why are you crying, it's just an error!?"
And she said she wanted to Otschy to change colour.
Because right now I am the only pet here that's fluffy and pink,
I need a cotton candy friend, I think!
She wiped her tears and we went on to the nutty tree,
Orangino said: "Shake those twigs for me!!!"
At first the tree stared and then burst out in laughter,
Shaking it's twigs the nuts fell down right after.
We collected all the nuts and went to the gingerbread house,
With the knocker on the door we knocked pretty loud.
A jessup opened the door an then let us in,
In the kitchen the cauldron with soup was filled to the brim.
We all ate some soup and then we marched on,
Sumo Sally seemed to us like a great deal of fun.
After that we went to look at the goals,
But the candy shop is what Pinkish looked forward to the most.
Aztic wanted to go to the Gumball Machine,
And the gumball it spit out was a nice shade of green.
The Candy Tree wanted us to do some quests,
It wanted chocolates and candy, nothing less.
At the bakery Zarale got a Pumpkin Pie,
Since she's wearing a Halloween costume, you don't need to ask why.
Then it was time to take our chances at the crossword puzzle,
But sadly we couldn't finish it because our brains were scrambled and fuzzy.
So at the chocolate shop we bought some treats,
And with all those chocolates we had a feast.
Everyone joined us even celebrity's,
Like the Obese Fairy and the Easter Bunny.
Then a cotton candy chibs sat next to Bodelia,
And she just stared in aw.
"What is you name?, she asked, and she introduced herself.
"My name is Fragrances", she said,"I used to be friends with an elf."
I caught Bodelia grinning and asked why she was doing that,
She said: "Finally I have found my cotton candy friend!!!"


Anyway, thank you very much for this opportunity!
I hope you find the best possible owner for Fragrances because surely she deserves it.

Sorr for the long app, I hope you enjoy it nevertheless!